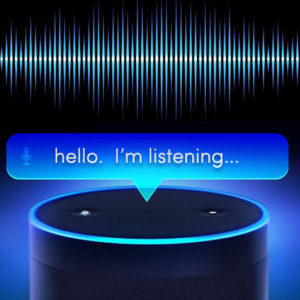 Yes we are Listening.

Why are you so willing to give up your privacy for the convenience of Alexa or similar type device. Same goes for your wearable tech gadgets. You have to also consider the video cameras, if you can see them so can someone else! The refrigerators and thermostats can be controlled by outside sources. The technology they are putting in cars can make you a prisoner in? your own car. You have Watson that can beat us at our own games. Facebook had to shut down an (AI) artificial intelligent program they were running because it was learning its own language. There are many robot driven programs running on Wall Street. Do you think they have learned their own language and communicating between them?

AI will destroy the coding jobs that is being taunted as the jobs of the future. AL will destroy coders the same way the revolution of the farming industry using machines to replace the amount of humans needed.Now it is the modern day textile industry that today is under assault from robots once thought untouchable. I heard my fill of supposed experts that say new jobs are created when the robots replace the humans. Our education system is failing our children which are suppose to be able to be better off than their parents. They are told your only way? to get is to get a college education. There any many course kids take that will have no value to their employment opportunities. The Academia and unions along with our Government failed our youth. Corporate America in their greed were turning America into a 3rd world Country. Our incompetent elected leaders ?allowed large corporations to export American wealth with the trade deals they allowed to happen is treasonous.

It is time to fight back before? it is too late. Start with getting rid of your covenant gadgets. Remember they can be hacked and if you can see it or control it on your phone or like device someone else can. It is nice to have your refrigerator remind you that you need milk but doesn’t help your mind, it makes you become dependent a machine remember for you. Do you really want to go down that rabbit hole? Robots have been taught how to out think like humans and out work like humans. The one thing we have that don’t is our thought ability, imagination at a young age and we are able to make choices and object and face recognition that is built into the human brain. If we don’t change course we will become slaves to our robots. Imagine down the road if robots to become our masters we will be pets to them. You might think you have control of your life but you don’t. That is why it is of the utmost importance that we change course now.

The best advantage we have over the Robots is our creativity. The software can be written and robot built to move objects, weld objects and even give them common sense but they don’t have an imagination or the creative ability that comes with it. Human brains (even though we have learned a lot) is wired in ways that can’t be explained. If they can’t be explained, the software can not be written. We have to turn the tides by refusing to purchase or allow these so called smart objects in our lives before it is too late and we humans become pets to robots.

With the Tech companies gobbling up their competitors puts too much power in too few hands. Amazon bought the company “Ring” and turned into a surveillance company. My neighbor canceled his account because he told me they wanted to tie his camera into a so called neighborhood watch account. Amazon owns the servers that the taxpayers pay for the use of their cloud service. Billions of dollars that is used to prop up Amazon to have artificial low prices that other companies can’t compete with. Just like the Government of China propping up its steel and other industries to create artificial low prices. Amazon, Google and Intel need to be regulated like any other utilty. Break them up and create more opportunities for more people. Our inept Congress allowed this to happen too. I wonder why? Could it be the amount of campaign contributions they receive and allow the lobbyist to write the bills they present? Most of them don’t even bother to read the bills that are passed even though they are cosigners of the bill. They should be tried for treason in my opinion. We need intent for prosecutions of treason. When Congress intended to allow laws to be written in prevalence to the lobbyist instead of what is best for America and the American people. They intended (or are they that stupid) allow these laws to be written. That is intent and against their oath of office. Should be tarred and feather and left to dry in the sun in my opinion for the crimes they have committed.