We have the Government we deserve. 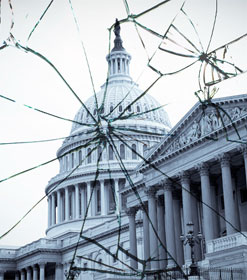 We have the Government we deserve. Our complacency allowed for the political elites, Wall Street and Corporate America to make sure they kept the people in office they wanted. They have bought our Congress and manipulated the system, with the help of the media, in the favor of what was best for them in detriment to America and the American People. The only time we have an opportunity to change the leadership is in the primaries. There are quite a few reasons for this BUT the biggest is our complacency. We are busy with our lives and make a decision that our vote won?t count. Nationwide only ten percent of the registered voters vote in the primaries that is where the problem starts. The Presidential and midterm elections come in November and we are stuck voting between twiddle dee and twiddle dumb so maybe 50 percent vote and the midterms between Presidential elections. We are inundated with commercials showing the shady deals each other does. So we are stuck with voting for who we think is the less corrupt. We know they are lying and won?t accomplish ten percent of what they proclaim in their ads or speeches. The media with the help of the political elites and the lobbyist with the most to lose will do whatever they can to distract anyone that would actually help, from running for office. They will seek to destroy any person or their career to stop them from running for office. The only way to defeat them is through social media. They can?t control it and if they try to why the platform we use another one will take its place that will be better. We build a place where people can find out the information about upcoming elections and who is running. Instead of spending millions of dollars on pacs, we spend the funds to build a network of who is who and what the problems or concerns are in each person?s area. There are many laws that are written by lobbyist that are not in our best interests. The only way to fix this is to have accountability in Washington. We should know the name of each person that ads some lobbyist interest amendment to a much pass bill. We should know the names, companies, lobbyists and foreign contributors to each elected official. They are public servants not private servants. The big public servant unions are just as corrupt as the politicians. You add corporations like the Red Cross that abuse their not for profit card way too often. Then we have the immoral Hollywood that pushes their perverse way of life down our throats in the garbage they produce for us to watch. They are completely out of touch with normal every day people. I believe the shows that cover the entertainment industry help with the vanity problem we have in American and around the world. People are too obsessed with the way they look. Vanity will kill you.

I believe that our opiod problem come from NAFTA and our corrupt incompetent leaders that we elected to do what is best for America and the American People. They have failed us! In the 90?s and into early 2000?s people were allowed to order opiod based pain killers that people could not walk into a pharmacy and buy without a prescription. As people watched their towns being hollowed out by the corrupt incompetent leaders that allowed for America?s manufacturing to move overseas for higher profits for shareholders but was devastating for America and the American People. The opportunities became less for the next generation. The opiods help fill a void of lack of opportunities. The answer everyone kept saying you have to have a college degree to have a good career. Corporate America went for short term gains and pulled out of helping to make sure there was a trade type school for the people we will need for the future workforce. Led by organizations like the Chamber of Commerce that have rhetoric that they are looking out for what is best for America but really are lying to the American people and dong the bidding of Corporate America which the CEOs and Board Members are more concerned about their profits and their shareholders profits. It doesn?t matter if it is bad for America and the American People as long as the money is rolling in.

Then in 1998 our incompetent leaders and the puppet Clinton allowed China into the WTO, World Trade Organization, without setting limits on how much we would accept of cheating the system. We kept hearing the rhetoric from every incompetent elected official that said they would fix the problems but when they got elected that worked for organizations like the Chamber of Commerce that are the lobbyist groups that really run Washington. I call them the K Street Whores. The K Street lobbyist runs the gambit from the Chamber of Commerce to Military Industrial Complex. They make sure the campaign coiffures are kept full because, one) it takes too much money to get elected. they have fundraising diners and parties, two) this is what helps to keep the establishment electing who they want. If you are a danger in any way, your life will become hell because they will work endlessly to destroy your character and life. That is why an average person won?t run for office. Who would to run for office if the media and the establishment try to destroy your life? Look at what they did to General Mike Flynn.

Our only chance to right the ship is in the primaries. The media isn?t going to help us but with social media we can stay in contact and informed. We don?t have to be obsessed but we have to spend enough time staying informed about public servants so we can hold them accountable. We can always start a recall petition to remove any public servant for not doing their job. Why can?t we hold them accountable for their lies? Why do they have some immunity that allows them to lie to the American People without being held accountable? The only we are going to fix America is to get involved and informed. Use your knowledge and what your friends, family and your social media family so we can vote in candidates we need to help President Trump to fulfill our agenda to Make American Great Again. 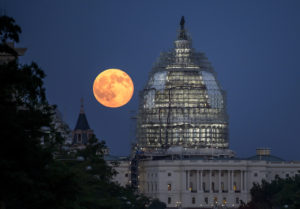 Time to replace the establishment political representatives with people that will work best for America and the American People. It starts with electing the right people and holding them accountable. This starts with us the deplorable patriots not being complacent. We start with the primaries, which is the only way we can replace the establishment politicians and replace them with patriotic public servants that will work for their constituents and America. We don?t have to commit 100 percent of our time to what is going on in Washington, along with our local races, but we do need to spend enough time to educate ourselves and stay in contact with other deplorable patriots that do keep track of who is who. If we don?t come midterms or the Presidential elections we are stuck with having to vote for twiddle dee or twiddle dumb. We are inundated with ads on TV and radio telling us how corrupt and unethical the other candidate is. Why would you want to vote for either one of the corrupt people? This is our chance to Rebuild America. It starts with us connecting and bypassing the media and the establishment. They still don?t know who we are and how many of us there are. President Trump is talking about term limits which also a movement is going around the Country. We The People are the ultimate term limit controllers. But if we don?t stay informed and do your duty as an American to vote we will end up back where we are down the road if term limits were put into place. If we don?t stay informed the establishment will create a revolving door again so they can keep the people they want in place.

That is why it is imperative that we get involved, stay informed so we can rebuild America to her greatness. It starts with the primaries so can throw out the bums. Then in the midterms we vote in the people that are want to Keep America Great.

3 Replies to “We have the Government we deserve”