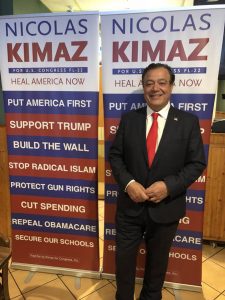 Why we have to elect Nicolas Kimaz in the primaries for Florida’s 22nd district.

Nicolas is the man with a plan to help President Trump keep the MAGA agenda moving forward along with KAG! agenda. Nicolas Kimaz will use his successful abilities from holistic healing to help heal America too. America is need of healing and Nicolas Kimaz is the person to help President Trump bring America back to the shiny beacon on the hill where she belongs. Starting from a child soldier at 15 years old fighting the Muslim Jihadist that wanted to eradicate Christians in Lebanon and around the world to becoming a successful Hollywood producer, pilot and mastered holistic medicine where he opened forty successful clinics in the Middle East and Africa. Nicolas lost family and friends in the battle against the Muslim Jihadists, that include groups like PLO, Hamas and the Muslim Brotherhood, which should be on the terrorist list. For someone to claim Nicolas is a Hamas sympathizer is an insult to Nicolas, his family and friends he lost fighting the evil Muslim Jihadists. After getting lucky in 1978 Nicolas and his family were lucky enough to get a visa to America. He made his way to Hollywood and became a successful producer and a pilot. Life in Hollywood is very cut throat and to be successful is rare. The stress of life in Hollywood, where everyone is out to stab you in the back, left Nicolas with a lot of illnesses like ulcers. He had a visit from Jesus in 1992 that healed Nicolas from his illnesses and led him into school for homeopathic medicine, where he used his talents in holistic medicine to open 40 clinics in the Middle East and Africa to help heal people naturally. In 2017 Nicolas has another calling from God to help President Trump heal America. Nicolas landed in the 22nd district of Florida and has been campaigning for over a year to introduce himself to his fellow Floridians.

Nicolas Kimaz has a message for America and the people in the 22nd district of Florida. I am not a politician, I am not politically correct, I will work with President Trump to fulfill the MAGA agenda. I will work to make sure funding is allocated to build the wall. I will work with President Trump to cut spending and fix our broken healthcare system and help to eradicate Radical Muslim Terrorists. Most importantly I will put America First. I love America, the freedoms it allows and the opportunities she gives to anyone willing to work hard for their goals. I was lucky enough to live the American Dream and I want to make sure it stays here for my kids and grandkids along with every other American. That is why Donald Trump ran for President. To keep America, America. We have the longest Government ever created from our Constitution and our Founding Fathers that wrote it.

This and other reasons is why I support Nicolas Kimaz for Congress inFlorida’s 22nd district and we have to get him elected in the Primaries on the 28th of August. With his successful life Nicolas has had he will be able to use is success to beat Ted Deutch in November.

One Reply to “We have to elect Nicolas Kimaz in the Florida’s primaries on August 28th.”