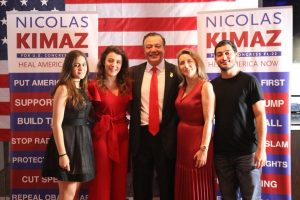 What we need is a proven successful leader like Nicolas Kimaz. Nicolas knows we are here on Earth to serve God. Nicolas has a proven record of success and leadership starting with being a child soldier at the age of 15 fighting the Muslim Jihadist that wanted to eradicate the Christians in Lebanon. Nicolas lost family and friends fighting the Jihadist and for anyone to try and imply that he is a Hamas sympathizer is an insult to Nicolas and his family. Nicolas has lived the American Dream after being lucky enough to get a visa to come to America in 1978. Nicolas was successful as a producer in Hollywood and became a pilot too. Having an encounter with Jesus in 1992 led Nicolas to school for Homeopathic Medicine to become successful in Homeopathic Medicine and opened forty clinics in the Middle East and Africa. Nicolas brought his methods of natural healing abilities to help heal people naturally. In 2017 Nicolas had another calling from God to help President Trump with the MAGA agenda and bring his healing skills to help President Trump heal America, America needs to heal too. Nicolas will help President Trump with the MAGA agenda and KAG! Agenda.

We ask for your vote in the primaries so we can #DitchTheDeutch in November.