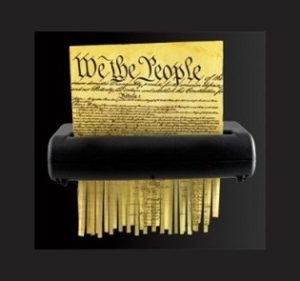 S.RES.118 is an abomination on the American People and America. This is an intrusion on Americans and our Religious and First Amendment rights.

(2)Whereas, in 2015, anti-Semitic incidents increased in the United States for the second straight year, according to the Anti-Defamation League?s 2015 Audit of Anti-Semitic Incidents, which describes trends such as the tripling of assaults targeting Jews since 2012 and the rise of online harassment and hate speech directed at Jewish journalists and individuals through social media; This is the next line of the resolution showing Anti-Semitic crimes have increased at the same time we have the influx of refugees coming from the Middle East.

As you can see above both Jews and Muslims had an increase in hate crimes but only the Muslims are called hate crimes. For the Muslims the Government wants to label it

as a hate crime but for the Jews it is only Anti-Semantic. This all happened during the previous administration which allowed unvetted refugees from countries that hate us. The Government decided to settle these people where they wanted without notifying the State or local officials. Places like Dearborn Michigan and Minneapolis Minnesota which are the two largest Muslim populations live and where the Muslims want to recreate the failed political system called Islam that they fled from. I would be embarrassed to belong to a religion that has the evil and hatred at its core that Islam does. Remember it only took 15 percent of Germans to cause the atrocities that they committed. With the political ideology of Islam we have more than twenty five percent that believe that that Islam is the only religion and anyone who doesn?t want to convert to their ideology they will kill. We have a perfect example in the news recently of how the Liberals think. They thought ISIS wouldn?t hurt them so they rode their bikes through ISIS country and got stabbed to death. The poem the Snake that Donald Trump read on the campaign trail gives a perfect example of how the Liberals (or corrupt owned elected puppets) are either ignorant or they are like the Quakers that settled in Pennsylvania in the 16th century that believed that ALL people were good. Their Governing way didn?t survive because they refused to believe that some people are evil. Evil exists. My question to Congress and especially Kamala Harris and Marco Rubio, who sponsored and cosponsored the bill, is why is the Muslim community more important than American Christians? When the Muslims say, write, put on signs and preach that America will become a Sharia state, why don?t you believe them? Look at Europe!! The ideological moron Khan that is the Mayor of London calls to ban cars. How are cars the problem? Same with a gun or knife being a problem. The problem is the evil behind the wheel or behind a gun. My question is why won?t? say Islam is the problem????

Next, who does the ?Anti-Defamation League consider ?White Supremacist?? You can?t call any ?White Person? you don?t like a ??White Supremacist?!! WE are fighting the ACLU too. Why do they consider Muslims are more important than Christians? Jesus was for love thy neighbor and Muhammad was for kill thy neighbor and take his property and rape the women. How can that be a ?Religion of Peace??

During the 2016?2017 school year there has been an increase in ?white supremacist activity? (according to the Anti-Defamation League) on college campuses across the United States, according to the( Anti-Defamation League); Who are the ?White Supremacist? that the ( Anti-Defamation League) and Congress are referring to? Why does Congress want to protect the Muslims more than the Christians? Most people that I know believe that Islam isn?t a religion but a political movement that wants to conquer the world and wants everybody to live in the 4th century when Islam was labeled a religion. Islam is a political movement that at the heart of it is, if you don?t believe the way we do we will kill you. Islam?s prophet got where he did by killing and pillaging people that got in his way or disagreed with him. Nothing has changed in eighteen centuries. They have never been able to beat us militarily so they sneak in using our own laws against us. Wake up Congress!

Leave a Reply to the best proxies Cancel reply